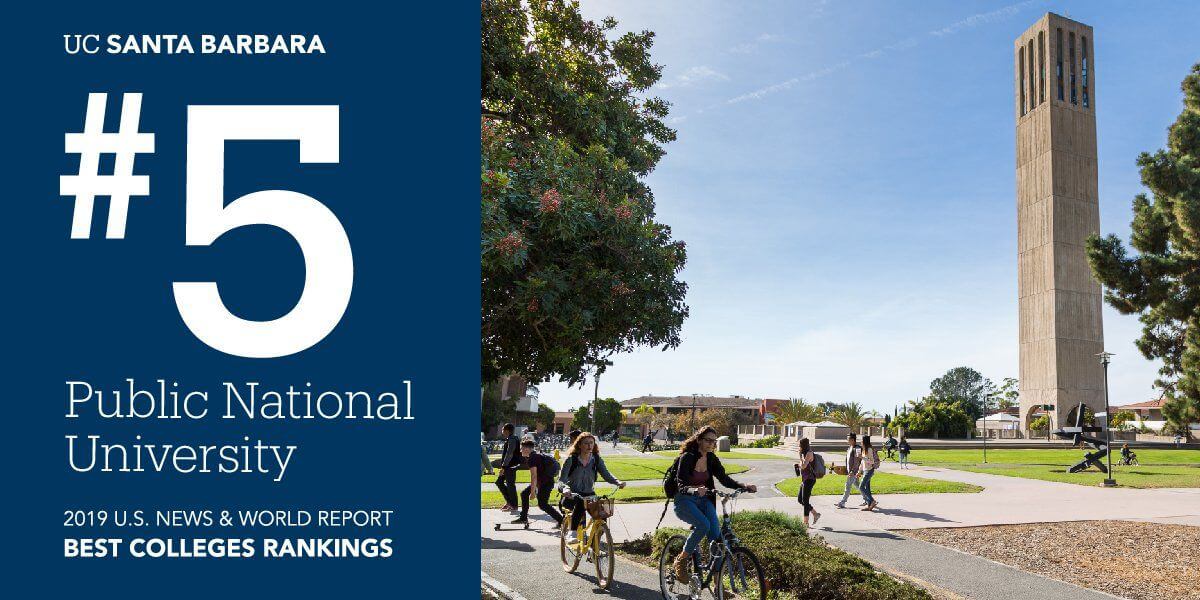 University of California Santa Barbara (UCSB) is ranked number 34 among national universities and number 5 among public universities in US News and World Report’s 2020 ranking. Besides its stunning seaside location, extensive bike paths and top-notch facilities, UCSB has many strengths including a long history of accomplishments in fields such as humanities, marine science and physics. The university also houses dozens of top research centers in diverse fields such as geography, autism and environmental science.

In recent years, faculty in the Department of Statistics and Applied Probability as well as faculty from other departments have witnessed a surge in interest and applicants in data science-related majors such as math and statistics. The university does not yet have a formal data science degree program and is in the midst of deciding how best to respond to this shift in student interest. UCSB is a real-time case study of a larger research-focused university finding its path and place in the new age of Big Data.

We sat down with Dr. Michael Ludkovski PhD, Chair of the Department of Statistics and Applied Probability to discuss data science at UCSB. Dr. Ludkovski has been working with colleagues and the university administration on a grass roots effort to carve a path to meeting the needs of the growing number of students, faculty and employers who are interested in data science. Dr. Ludkovski specializes in quantitative finance and actuarial science, one of the degree programs offered in his department, along with majors in financial mathematics and statistics.

He and his students have been working for several years in the InsurTech arena on research projects. Dr. Ludkovski is looking to leverage his department’s established relationships with national and local firms through sponsored student team research projects in actuarial science, to help the university achieve a similar program in the field of data science.

UCSB has historically been known to a greater extent for its humanities and non-technical degree programs and less for math, computer science and technical degrees (which are still excellent). And while it does boast a top-ranking Physics program, the university has just a handful of “professional” graduate degree offers in STEM fields. However, Dr. Ludkovski tells us that in recent years at UCSB,

“The number of students interested in pursuing data science, computer science, and mathematical sciences has been growing exponentially.”

Since 2010 the number of students pursuing majors in Dr. Ludkovski’s department has grown from 200 to 1,400, a 700% growth in less than a decade! Here’s to better data literacy!

Dr. Ludkovski speculates that students who perhaps may not previously have been math-oriented are considering pursuing careers in data-driven fields. Presumably they feel a need to study a more analytical field. He explained that the demand for data science courses is having a huge impact on the Statistics and related departments in terms of resources and organizational needs to meet this growing demand. 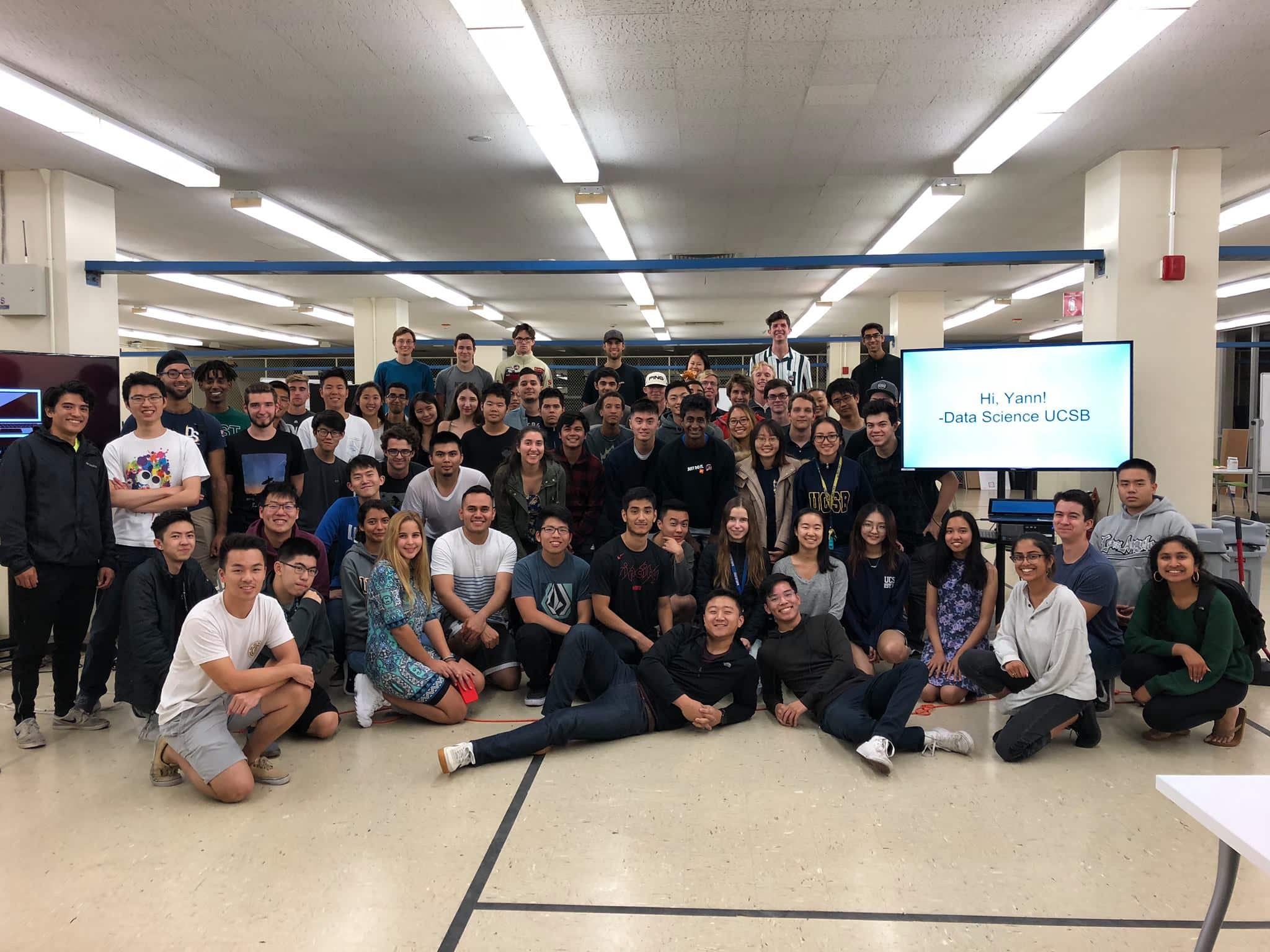 Another indicator of shifting student interest is the student-founded and student-run Data Science Club that is flourishing on UCSB’s campus after just over a year of existence. The UCSB Data Science Club was created by students interested in pursuing careers in data science and currently has over 100 members. Dr. Ludkovski sees the club’s membership easily growing to 500 members in the coming years. Among other pursuits, the students in the club work on data science projects and showcase and compare.

In addition to student demand, Dr. Ludkovski says that employers and donors alike have expressed a lot of interest in seeing a data science program developed at UCSB.

“Employers in general are hiring at the junior data scientist level right now, that’s where the demand is. Developing core data science skills at the undergraduate level is a must.”

He notes that while a Master’s Degree Data Science is still sought out by many employers, he predicts that in the future we will see the core skills and a broad foundation in data science being developed at the undergraduate level. He believes thereafter that those who pursue a Master’s in Data Science will focus more on developing a niche within the field, such as a Master’s in Environmental Data Science.

Finally, donors are beginning to ask about a data science program. Dr. Ludkovski points to UC San Diego who recently received a $75 million donation “for Data Science” which it then used to create a research institute.

This shift in demand, both from students and local business, presents an administrative and resource challenge for such a large university with a wealth of different funding channels and resource allocations. Creating a new data science major (or any other one) is not something that happens overnight, as Dr. Ludkovski explains of data science,

“The data science program needs a home and currently it doesn’t have one yet.”

One thing UCSB does know, Dr. Ludkovski says, is that it’s not in a position to create a program like UC Berkeley has. Berkeley was in a rare position to partner with highly successful companies and alumni to create its Data Science program. Nor can it emulate MIT which has essentially turned the entire campus into a data science school. He explains,

UCSB is approaching the development of its data science program at the grassroots level, from the bottom up, taking it step by step.

So, what are those steps?

This is the “grass roots” part of developing UCSB’s data science major. In recent semesters UCSB faculty in areas such as computer science, statistics and even English, have started a data science effort by creating courses geared towards the field. These include new courses on statistical learning, big data analytics, cloud computing, an Introduction to Data Science course, computational statistics and even a course that addresses the “mutation of humanities into data science”.

In preparation for future data science course development, in fall 2018 the Department of Computer Science launched a Foundations of Data Science course. Among other data science basics the course will touch on issues of data ethics and privacy. According to Dr. Ludkovski, the goal of this course is to prepare students for hands on work and critical thinking rather than “just dumping data sets” on students. He also notes that in the future,

On that note, the university decided this year to teach Python in its Introduction to Statistics course which is taken by 1,500 students each year. In addition, a course covering R programming and SQL databases has been created for the 1000+ students pursuing STEM related majors.

The question for a lot of these courses is where should they live administratively as part of a data science major? The answer depends on a host of administrative decisions that have yet to be made. Which brings us to the next step.

It’s only natural that at a large university like UCSB, individual colleges and departments with their vast numbers of students and classes operate in a siloed fashion. However, data science, as we all know, is a field that touches many disciplines across a variety of academic areas. Recognizing that an interdisciplinary approach is needed, university faculty members and staff formed a working group to facilitate UCSB’s “Data Science Initiative”, of which Dr. Ludkovski is part. 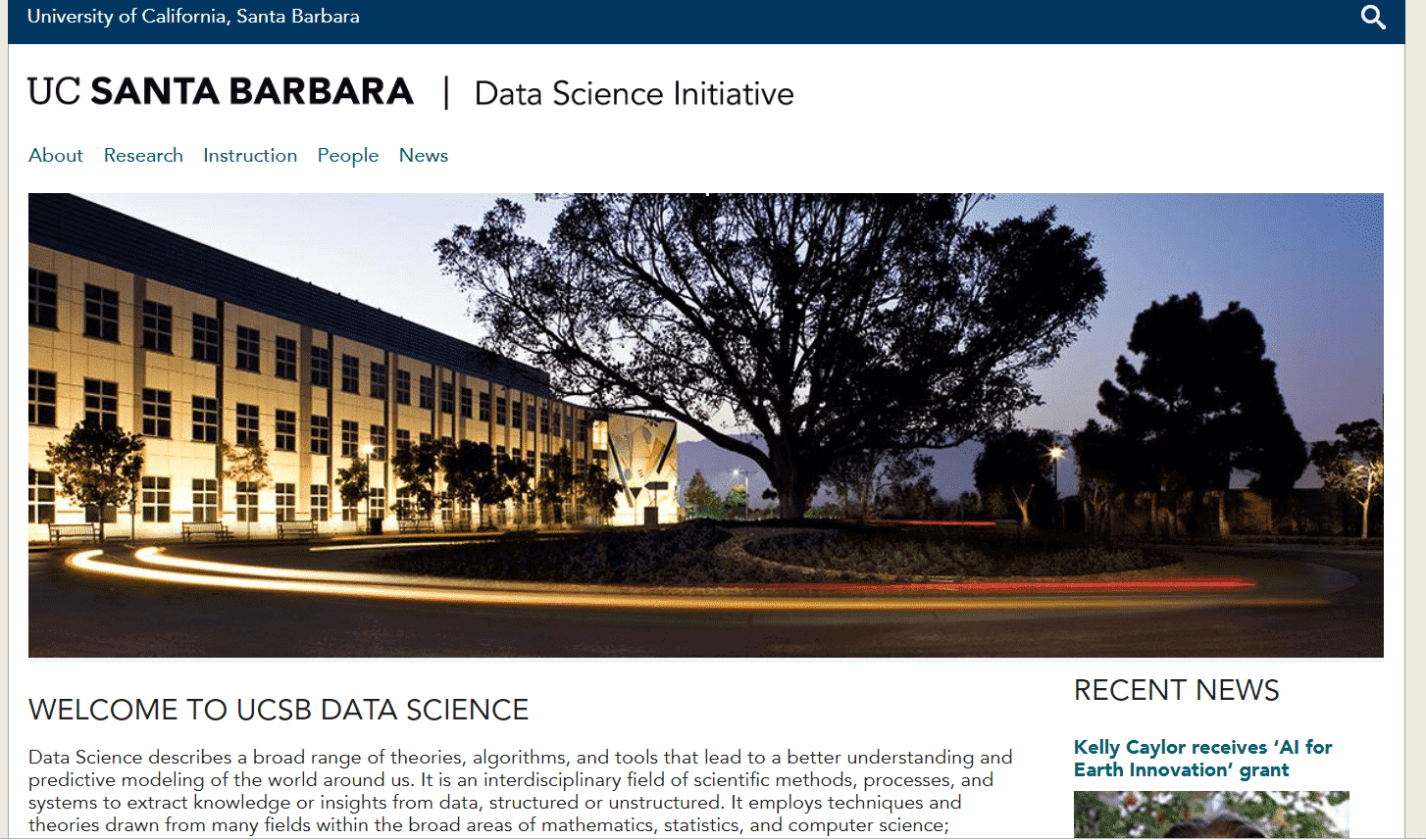 The Data Science Initiative was launched just a year ago with the goal to facilitate the creation of a data science degree program at the university. The UCSB Data Science working group, which is comprised of 18 faculty and administrative staff – one of which is Dr. Ludkovski – plays a primarily organizational role. Its members represent the various areas of the university such as research programs and centers that have a vested interest in the development of a data science major program. There are about 15 of these research centers at UCSB including a Smart Farm, the Institute for Energy Efficiency and the Earth Research Institute. The Data Science committee addresses issues such as resourcing, administration of courses, etc. Its primary challenge right now, among others, is to find a “home” for the data science major.

As with other large universities that have many research projects competing for resources, funding for new programs is not easy to come by. Faculty must be hired, curriculums developed, administrators hired and much more. Fortunately, UCSB, along with Cal Poly, Santa Barbara City College and Cal State San Bernardino, received a $900,000 NSF grant in 2018 to assist with the development of undergraduate Data Science curriculum using a multi-campus approach. Each college has its ideas and issues to address, says Dr. Ludkovski. The grant will allow UCSB to develop an undergraduate capstone seminar for data science and progress on developing curriculum. That said, there are still funding issues to be worked out if the degree program is to find a place at the university.

As mentioned previously, Dr. Ludkovski too plans to use his experience developing a similar capstone program within the insurance industry for his actuarial science students. Students in UCSB’s Actuarial Science degree program can work with insurers such as Towers Watson and Fidelity. This strong program is the only one of its kind in California and is very hands on, hosting a significant recruiting fair each year. It effectively applies Data Science to the insurance industry.

Dr. Ludkovski believes that the UCSB’s experience running this program provides a solid foundation for developing a data science program.

“We’ve been doing capstone projects in Actuarial Science for a decade…so we know what the issues are with running a program like this.”

As for what kinds of issues he and his colleagues have managed while implementing capstone curriculum, Dr. Ludkovski notes the examples of technical writing and effective teamwork as being surprising challenges for students. Another challenge is training faculty on how to manage project teams.

“You can train on soft skills in a capstone. Soft skills always differentiate students.”

In a similar fashion UCSB plans to partner with about a dozen local companies which are seeking to collaborate with the university and its student body on data science projects. These companies range from the local hospital and a medical foundation to tech companies, and could possibly include Amazon’s local operations at some point. Students will also have the opportunity to work with on- campus research projects in areas such as environmental data science.

As for any potential data science major curriculum, some have speculated that many new data science degrees are simply existing university courses that have been repackaged with a “cosmetic change”. This is not the case at UCSB explains Dr. Ludkovski,

This is in fact the primary reason for focusing on developing a capstone project.

It’s clear that there will be no shortage of students applying to UCSB’s new data science degree program when it does launch and no shortage of employers asking for help sorting out their Big Data needs with the help of university students. So with all this demand, when then, does UCSB envision launching its data science degree program? With a new course launching this fall, and several others lined up, Dr. Ludkovski cautiously predicts that the university may be in a position to launch a degree program in about two years. That said, it is clear that even today, there are plenty of opportunities to study core data science skills within the existing undergraduate curriculum.

As for those nanodegrees… 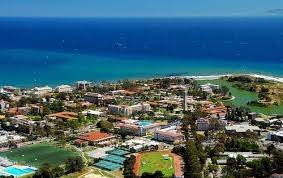 As is customary in these Quantcrunch interviews we asked Dr. Ludkovski for his opinion on the value of nanodegrees and other data science certifications. Dr. Ludkovski offers a very practical perspective on these.

“It’s my observation that students are happy to be here at school.”

With a top national ranking, a sunny beach side location (see image at right), and a data science major with project-based experience in the works, the future looks bright for preparing data science students at UCSB.

We’d like to extend a warm thank you to Dr. Michael Ludkovski for taking the time to enlighten us about the path to developing a data science degree program at a major university.

Interested in knowing more about UCSB’s Data Science Initiative and Research? Check it out here.